Rob Jones of Falmouth was the top overall finisher, completing the course in 22 minutes. Elizabeth Krane of St. Louis, Mo. was the top female finisher with a time of 24:53. Top finishers in each age group were also recognized.

Skies cleared and a beautiful sunrise greeted swimmers at the start of Saturday’s event. Swimmers gathered on the beach next to the former Davy’s Locker restaurant in New Bedford’s South End. The first wave of swimmers started at 7:15 a.m., and by just after 9 a.m. the final swimmers had covered the 1.2-mile course and arrived at the finish line at Fort Phoenix Beach State Reservation in Fairhaven.

“My favorite part of the Swim? All of it!” said Laurie Hellstrom of Fairhaven, a 10-time swimmer who participated this year for the first time with her 14-year-old daughter, Addie. “The distance and ocean conditions can be challenging, but it feels meditative and peaceful once I find my rhythm. I love being out in the middle of the water because it’s like nothing else.”

Together, swimmers raised over $170,000 and counting to support the Coalition’s work to protect clean water, conserve land and educate youth and adults across the Buzzards Bay region. Supporters can donate to the Swim at www.savebuzzardsbay.org/swim until July 31 to help earn the Coalition an extra $50,000 matching challenge grant from longtime swimmer and West Falmouth resident Larry Fish.

“Buzzards Bay is where I have my home. It’s a beautiful and precious place to me, my family and so many others,” said Fish, the former chair and CEO of Citizens Financial Group. “The Coalition is one of those places where you can be confident that your support is going to have a tangible benefit.”

The Swim drew participants from 160 communities in 16 states, including as far as away as California, Texas and Missouri. Swimmers ranged in age from 12 to 79.

“Buzzards Bay has always been a big part of my life, and being able to help it and get involved with the Coalition really helped me realize why it’s so important that we all need to protect it,” said Sam Harris, a 15-year-old Old Rochester Regional swim team member from Marion.

“The Swim is a great opportunity to push yourself and see what you can accomplish, and even better to do so for a worthy cause!” said Xan Williams of Rochester, part of the two-person team SPLASH! along with her mother, Rebecca.

After the Swim, participants, volunteers and supporters enjoyed a finish line beach party with a hot pancake breakfast, complimentary massages, local craft beer by Buzzards Bay Brewing, steel drum music from El Caribe and a live broadcast by Chris “Gazelle” Arsenault of Fun 107. The event concluded with an awards ceremony that honored the top finishers, fundraisers and longtime swimmers.

Rob Jones of Falmouth was the top overall finisher, completing the course in 22 minutes. Elizabeth Krane of St. Louis, Mo. was the top female finisher with a time of 24:53. Other top finishers included Jason Bernard, 16, of Westport (22:52) and Albert Garcia of Barrington, R.I. (22:53).

The Wheeler Watershed Challenge Cup for the fastest team went to the “Salty Sea Dogs” (Alex Gallant of Lakeville, Jack Bauer of Cumberland, R.I., Nicholas Graca of East Freetown and Adam Reitz of Hilton, N.Y.) with an average team time of 25 minutes and 44 seconds.

Five swimmers – Laurie Hellstrom of Fairhaven, Mara Honohan of Fairhaven, Max Medina of Marion, Leslie Trott of Cedar Grove, N.J. and Stephanie Trott of Fairhaven – received the “Cuttyhunk Award” for participation in 10 Swims, which is equivalent to swimming the distance between New Bedford and Cuttyhunk Island. 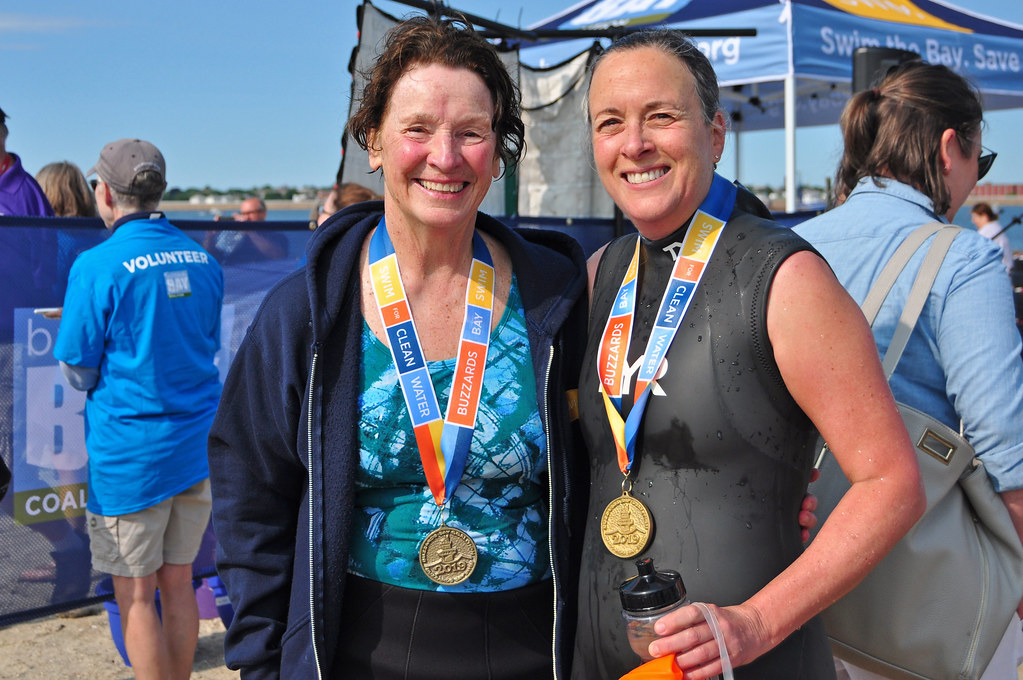 The Buzzards Bay Swim is one of two signature outdoor events hosted by the Coalition. The other is the Buzzards Bay Watershed Ride, a one-day scenic bicycle ride with 100-mile, 75-mile and 35-mile routes from Little Compton, R.I. to Woods Hole, Mass. The 13th annual Watershed Ride will take place Sunday, October 6.

Rob Thieler's passion for open-water swimming with the Chappy Swimmers inspired his decision to dive into the 28th annual Buzzards Bay Swim.