Dan Vasconcellos of Pembroke swam in his 20th Buzzards Bay Swim in memory of his father, Arthur.

As of the start of the event Saturday, swimmers had raised $120,000 to support the Coalition’s work to protect clean water, conserve land, and educate youth and adults across the Buzzards Bay region. You can still support the swim by donating online.

“The Buzzards Bay Swim is a fantastic celebration of clean water in our community,” said Coalition President Mark Rasmussen. “The fact that nearly 250 swimmers came out this morning to swim across New Bedford Harbor – one of the biggest Swims in 23 years – shows how important clean water is to people here on Buzzards Bay.”

Calm, clear waters and bright sunshine greeted swimmers as they gathered at The Edge Seafood & Lounge beach in New Bedford’s South End. The first swimmers started at 7:15 a.m., and around 9:00 a.m. the final swimmers had covered the 1.2-mile course and arrived at the finish line at Fort Phoenix Beach State Reservation in Fairhaven.

“This is such a great event because it’s all about community,” said Laurie Hellstrom of Fairhaven, a masters swim team member at the New Bedford YMCA who completed her fifth Swim today. “It was a beautiful day. The water temperature was perfect, and you could see both the sun and the moon while you were swimming.”

The Swim drew participants from 120 communities in 15 states, including as far as away as Alaska, Washington, and Florida. Swimmers ranged in age from 12 to 76.

First-time Buzzards Bay Swim participant and New Hampshire resident Peggy Chisholm grew up in Padanaram, and she swims in Buzzards Bay when she visits southeastern Massachusetts on weekends. “I love these waters,” she said after crossing the finish line.

Vasconcellos remembers when water conditions weren’t so clear when he participated in his first Buzzards Bay Swim over 20 years ago. “You might have been able to see your hand in front of you. Now, the conditions are unbelievable. I like to think it’s due to the efforts of the Coalition.”

After the Swim, participants, volunteers and supporters enjoyed a finish line beach party with a pancake breakfast, complimentary massages, live music from El Caribe, and a live radio broadcast with Michael Rock of FUN 107. The event concluded with an awards ceremony.

The Wheeler Watershed Challenge Cup for the fastest team went to the “Salty Sea Dogs” (Alex Gallant of Lakeville, Nick Graca of East Freetown, and Trevor Ragas of Lakeville) with an average team time of 25 minutes and 51 seconds.

For a full list of results from the 2016 Buzzards Bay Swim, visit www.savebuzzardsbay.org/swim. 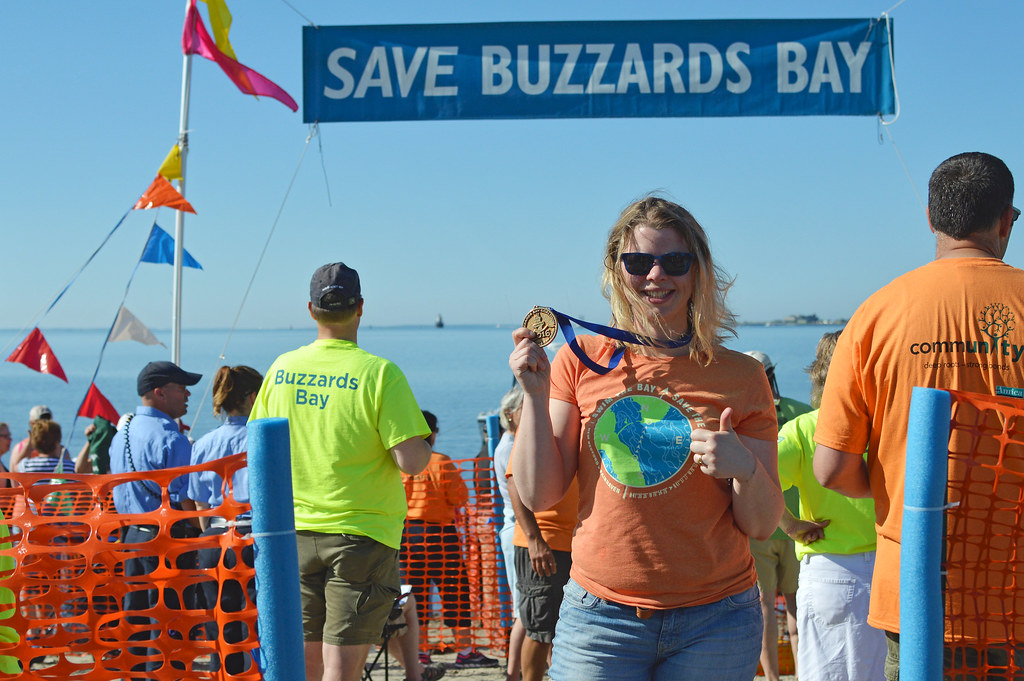